Since half the class was missing last Thursday, we’ll simply discuss the entirety of the Woman of Colour next week.

Each of you will also post a 500 word reflection essay on the blog by Wednesday evening on the results of your annotated bibliography.  Though the reflection is open, you may if you wish answer the following question: how did the research and writing for this bib change your views of this particular book, and of other books read this semester?

Keep thinking about the topics and authors you’d like to approach for your final assignment.

Let me know if you get stuck. 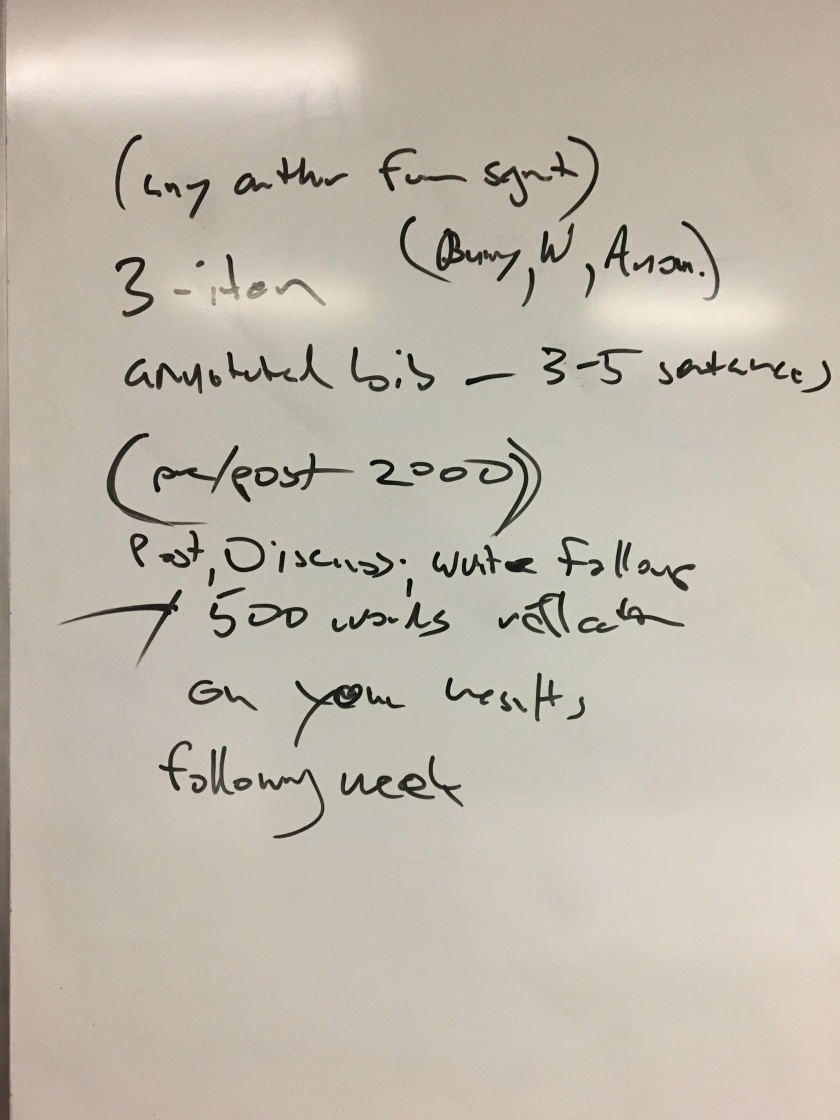 As we discussed in class, we’ll do a second, slightly more ambitious annotated bibliography next week.

If you have questions, put ’em on the blog in the comments.

In her strikingly reflective article, Chaber considers the complexity and ambiguity of Richardson’s representation of gender. She reviews the contemporary dogma of divine providence, bringing in Richardson’s own religious beliefs and correspondence to critique his gendered portrayal of Christian belief and worthiness. Particularly noting that, in this dogma, ‘suffering’ is understood as passively accepting the divine will of God and ‘acting’ is understood as working for one’s own aims rather than trusting to God, Chaber reveals Clarissa’s original sin as her defiance of her parents’ will and her temporary resolution to escape with Lovelace. Also employing an analysis of Richardson’s form as “an inversion of the classic tragic pyramid,” Chaber argues that Clarissa is ultimately redeemed when, faced with the imposed choice to either marry or prosecute Lovelace, she “does what she should have done earlier—nothing” (527, 532). Thus, while Richardson’s depiction of gender and credentials as a feminist or proto-feminist remain debated, Chaber argues that he puts forward a conflicted view of female agency that ultimately rewards Clarissa’s willingness to suffer and her devotion to the Christian path of ‘passivity’ with the highest of earthly esteem and heavenly reward.

Following a brief illumination of the history of Clarissa’s reception as a feminist, proto-feminist, or anti-feminist text, Johnston argues that it is not Clarissa herself, but rather the cast of villainous women around her, who best articulate the text’s negative view of women. While Clarissa is promoted as the feminine ideal, the women around her come up short—sometimes to disastrous effects, as Johnston demonstrates. She suggests that the novel indicts almost all of its women; from Clarissa’s own mother and sister, whose weakness and jealousy, respectively, alienate Clarissa from the family, to Mrs. Sinclaire and her sex workers, who resent and torture Clarissa, ultimately spurring Lovelace on to her rape. Though it is Lovelace who ultimately performs the act of rape and instigates Clarissa’s imprisonment, Johnston points out that he is allowed to be redeemed and humanized through the interiority and remorse of his letters; the Sinclaire house prostitutes have no such opportunity and, instead, confess their culpability and die unrepentant. Women—specifically fallen women—more specifically groups of women—are shown to be, as Johnston claims, “the root cause of all evil.” Women may be excellent, as Clarissa’s extreme virtue demonstrates, but they are more likely to be bad—and when they are bad, they are far, far worse than the men.

I’m hearing that I was overoptimistic about the time needed to finish reading this book.

I’m revising our schedule slightly, so that everyone should post their selective annotated bibs tonight as standalone posts before class. Do those as your own posts, not as comments to mine. I will move the second blogging assignment I mentioned before to next week, to set up our final class on Richardso.

We’ll finish up the final portion of Clarissa the following class, so that we have time to do both assignments and discuss them.

If you’re having trouble with the annotated bib, or  WP posting generally, let me know on the blog or via email. If it gets too hard, send to me via email and I’ll post.

Thanks, and take care,

Next Thursday will be our first Reflection Day, when we can discuss the texts we’ve read and the research you’ve posted, to see where we stand in relation to our material so far.

One of my fundamental teaching principles is that students need to present the results of their work to one another, in order to learn the material more thoroughly, and that they need to participate in independent inquiry and then collective discussion and reflection to do the kinds of work demanded by the discipline, whether at the college major, graduate, or professional level.

Here’s my description and rationale for the first annotated bib assignment:

Any questions?  Put them up on the blog.  I’m also happy to chime in with suggestions if you get stuck.  Good luck, DM